Yikes!! Due to the weekend, I'm a couple blogs behind!


MRI
An MRI played a large role in my diagnoses of Cushing's Disease, it was an MRI machine which found the tumor growing on my pituitary gland.﻿
MRI (Magnetic Resonance Imaging) is a medical imaging technique used in radiology to visualize internal structures of the body in detail. MRI makes use of the property of nuclear magnetic resonance to image nuclei of atoms inside the body.
An MRI scanner is a device in which the patient lies within a large, powerful magnet where the magnetic field is used to align the magnetization of some atomic nuclei in the body, and radio frequency magnetic fields are applied to systematically alter the alignment of this magnetization. This causes the nuclei to produce a rotating magnetic field detectable by the scanner, and this information is recorded to construct an image of the scanned area of the body. Magnetic field gradients cause nuclei at different locations to process at different speeds, which allows spatial information to be recovered using fourier analysis of the measured signal. By using gradients in different directions, 2D images or 3D volumes can be obtained in any arbitrary orientation.
MRI provides good contrast between the different soft tissues of the body, which makes it especially useful in imaging the brain, muscles, the heart, and cancers compared with other medical imaging techniques such as computed tomography (CT) or X-rays. Unlike CT scans or traditional X-rays, MRI does not use ionizing radiation. 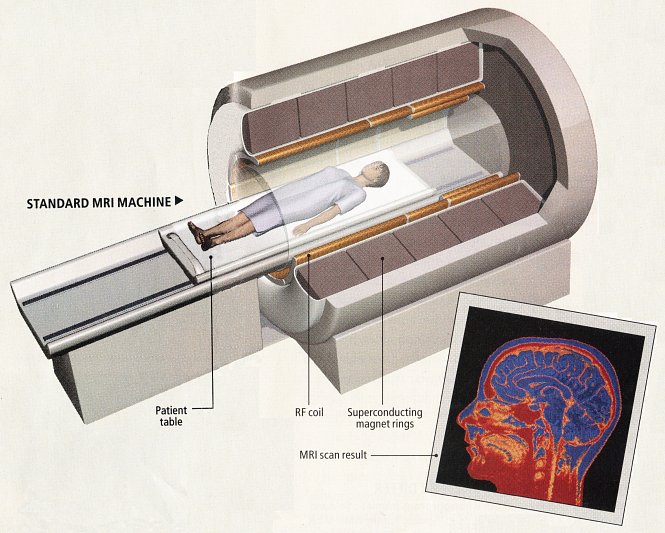